New Information regarding the Bounties of the Yonko (News Roundup)

There’s been a few news going around the past few days regarding important information on the bounties of the Yonko as well as other minor tidbits about other information, so I thought I’d do a quick news roundup on all the info that came out:

First of all was the leak of an article from VJump that touched on the bounties of the Yonko. Being from VJump, it means that it must’ve been approved directly by Oda’s editors, so while that might not 100% authenticate that it comes from Oda, it should still be considered as canon: 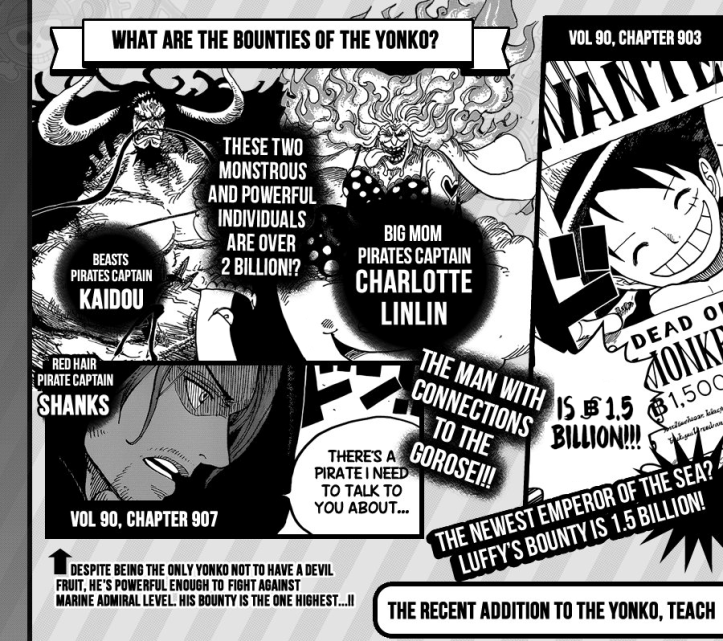 The major pieces of information out of this are:

– Big Mom has a bounty of at least over 2,000,000,000 Belly. While this implies it possibly being under 3 billion, it doesn’t necessarily state as such, so the only thing we can go off of is that it is superior to 2 billion

– Shanks is confirmed to not have a devil fruit, definitely a major piece of information. He’s also said to “have connections to the Gorosei”, but I’m not sure if this means much

– Luffy’s addressed as an emperor, but the vague way it’s worded makes it sound ambiguous just like it is in the story, where some consider him one and others don’t

I’ve also heard some people bring up him being able to fight an admiral without a devil fruit and I don’t think that means much ultimately, as it’s likely just referring to his clash with Akainu at Marineford, so I wouldn’t put much thought behind it. Also, while Dragon is considered “the most wanted man”, it doesn’t necessarily implicate he has the highest bounty, despite it being possibly implied. At the very least, there’s the possibility that Shanks might have the highest bounty in the series and if not, at least among the Yonko.

That’s all the relevant information about that for the moment. We’ll have to see if more comes out down the line, but for now it’s mostly rather vague statements for the purpose of not spoiling the story, even if some of those statements are definitely big.

Speaking about news, in just a couple days comes the One Piece Magazine Vol. 5, which will include a bunch of new tidbits of information on several things here and there as well as the entirety of all sons of the Charlotte Family! But before that, let’s have a final update, as the anime introduced us to two new sons, the 29th Son Charlotte Chiboust:

as well as the 38th Son Charlotte Newsan (the largest of the decuplets, with the purple hat). This shows the pattern in the names of the male Charlotte Decuplets, which would make the five of them Charlotte Newichi, Newni, Newsan, Newyon and Newgo respectively.

There’s also quite a few Charlottes that got their color designs in the anime, so here’s a look at all of them. With the Magazine so near, the entire Charlotte Family will be finally revealed in just a couple days from now! Stay tuned by then to get all the info!

On a final tidbit of news, the next vivre cards will come out on February 4th and will feature the:

That’s all for now. Stay tuned for updates on all of this information right here at the Library of Ohara!