Some months ago, Oda did a collaboration with famous Japanese boy band Arashi. You might recall them from the spread Oda did for the collaboration for Chapter 967: 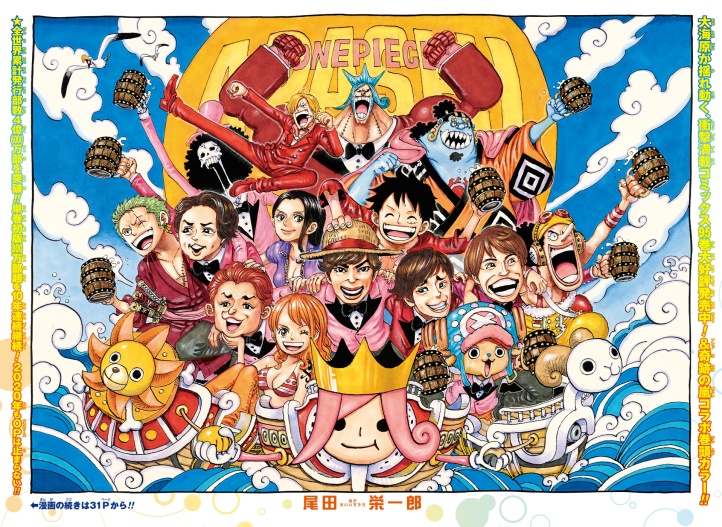 Just recently, Arashi sat down with Oda in the Jump office to interview him, shedding light on some fun facts about the author as well as the series for a TV show. So I decided to watch the whole interview and summarize all the important and relevant points below!

Opening part of the interview: Arashi members are encouraged to look around the Jump office, which gives us a better look at the office where all the editors work. It is filled with plenty of franchise memorabilia, such as posters, figures, a Chopper plushie and even a real-life replica of Law’s Kikoku blade. They also find a section where all fan mail is stored to be sent to their respective mangaka, highlighting a fan mail box about Toriyama in particular, as well as the yet-to-be-released (though already released by now) Jump copy alongside a copy of the storyboard and the manuscript for the latest chapter

Oda then appears and talks with the Arashi members. Oda’s editor Naito heads into a vault within the Shueisha office and with a secret key pulls out the original manuscript of Chapter 1!!! Oda claims he hasn’t looked at it in 23 years. He gives the manuscript a glance and jokes that “hmm, this is pretty good stuff”

Onto the interview itself. It’s generally divided into three parts:

– Oda is asked if he has already decided how many years he expects One Piece to last. He states pretty bluntly “4~5 years left” Note: In an interview last year, around this same time, Oda stated that he believed One Piece had 5 years left. This estimate seems to have slowed down a little (might even have to do with him having to take more breaks recently), but it is still a shorter estimate than last time, indicating that Oda seems to firmly believe the series has less and less time left as we slowly approach the end, so 4~5 years really might not be a ridiculous claim

– He’s also asked if he has already planned everything left until the end and Oda says “at this point, I’ve got no more doubts” (implying he’s already planned out the large part of it all from now till the end of the series). He’s asked if they can expect a really cool ending, Oda “humbly” affirms “It will be really cool indeed”. Naito also supports that the ending will be “legitimately cool”

Note: All of Oda’s editors are known of having been told the entirety of the ending of One Piece

– Oda talks with Arashi about their collaboration on the colorspread. Nothing really relevant here, but we get a look at Oda’s sketches for the Chapter 967 color spread

Note: to understand the following bit better, a quick refresher on how manga is made: every week, a mangaka makes a storyboard for the chapter (rough drawn version of it) and talks with the editor on if the chapter is good or needs tweaking. If it’s really good he might proceed ahead, otherwise he might need to tweak it again. Then, once it’s approved, he proceeds to turn it into the finalized manuscript, what you see in the final release

– They explain Oda’s weekly schedule. Usually Oda has three days to work on the storyboard for the chapter, plan the story for that chapter out, and meet up with the editor to decide on it. The fourth day of the week is his deadline to submit the storyboard. Oda says there might’ve been a few times he missed the deadline and claims his editors would “come after him and get very mean”. After that till the end of the week is creating the manuscript

– Oda is asked what manga he likes to read. Oda comments that these days he just resorts to looking up recommendations online by just googling “cool manga”

– This section showcases some facts about Oda as shared by some of his editors. For starters, it talks about the (previously already known) fact that One Piece got rejected for serialization a total of three times before it was finally published on Jump

– Arashi asks Oda why he didn’t go to Weekly Shonen Magazine or Weekly Shonen Sunday (Jump’s competitors in the manga space), Oda says that he wanted to work in Jump because it’s where his idol Akira Toriyama worked at, wishing to work in the same magazine as him

– Longest phone meeting Oda had with an editor talking about the planning of the series was a total of 12 hours in a row. Oda’s editor Hattori actually fell asleep during a part of it due to how long it was going on. For reference, Hattori was Oda’s editor from Sabaody to Fishman Island, so it likely was planning for the Summit War Saga

– Oda disproves once again the long-standing rumors that he has an ATM in his home, he’s unsure how the rumor emerged

– This fact was also already known, but during Oda’s first time meeting his new editor Sugita, the very first thing he said was scream “CHANGE!” (as in, “I want another editor”) before they even had time to know each other

– Oda spent an unspecified amount of money on a One Piece gacha mobile game to attain a “super rare Shanks”. Oda has a bit of a gacha spending problem 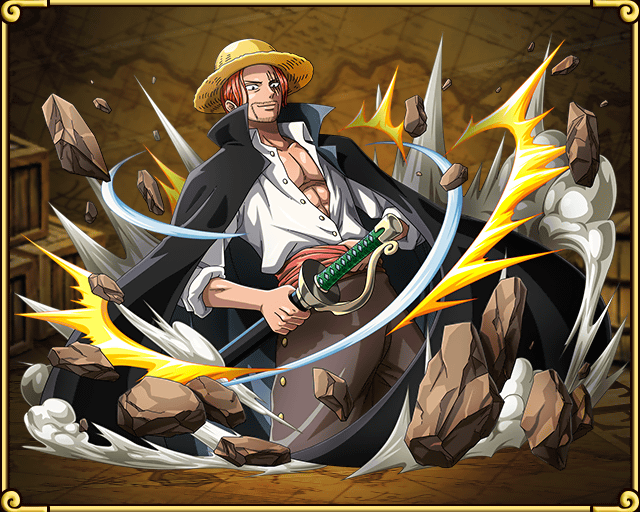 – When Oda was making the manuscript for chapter 797, when Rebecca reunites with Kyros, he was missing his deadline, making his editor Sugita very anxious. However, when Sugita received his manuscript, he teared up from how emotional the scene was. Oda also ended up crying when drawing that scene. He mentions that if a scene can’t make him cry then he doubts his audience would cry as well. Oda is then asked which manga made him cry the most and just says it’s One Piece 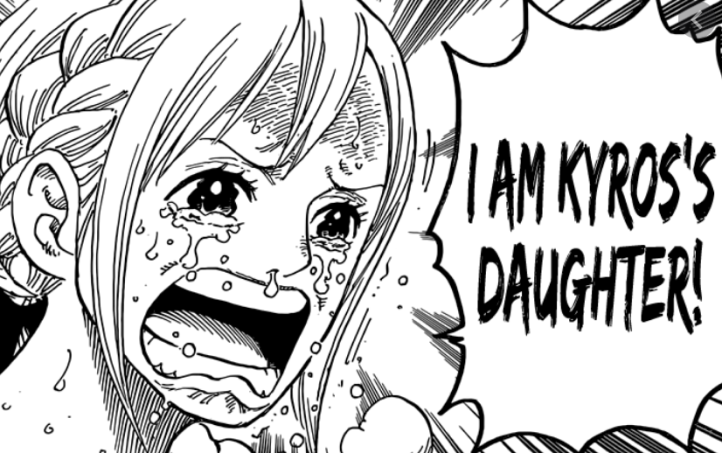 – Oda is asked what are his top 3s in some categories. He reveals his top 3 favorite scenes in One Piece:

– 3: The campfire scene in Skypiea in Chapter 253: envisioning this scene was what motivated him to make the Skypiea Arc 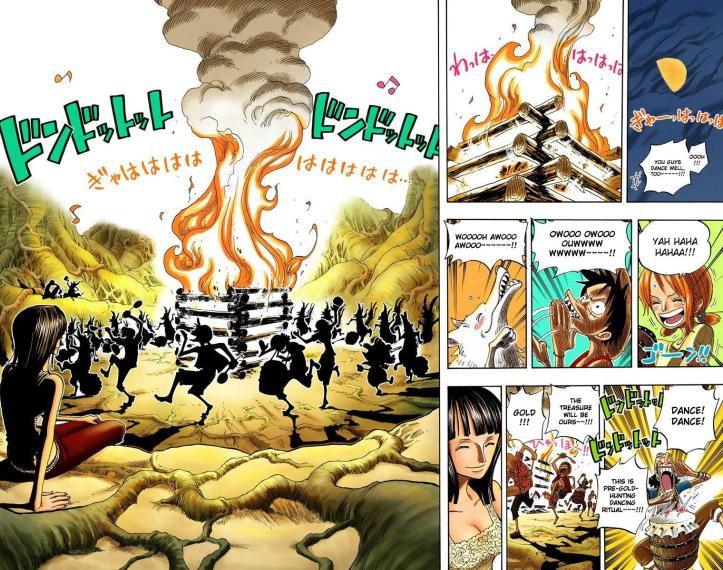 – 2: When Robin wipes off the Sabaody sap on Usopp’s pants in Chapter 496: because it lends his world a feeling of realism

– 1: The opening spread page of the Wano Country in Chapter 909: Oda was excited to get to Wano, he says he wanted to feature a place with samurai, ninja, and all that stuff in the story before, but held off since he felt like he would be ripping off Naruto if he did

– 3: The staff of the anime “The World of Golden Eggs”

– 3: When he gets to hang out and get close with the One Piece anime staff (like the VAs)

– 2: The moment when he’s grilling meat and it turns that perfect pink

– 1: Going to Kenko Land (Kenkou Land, which translates to Healthy Land, is a Japanese chain of spas aimed at relaxation and unwinding stress), because he gets to hang around with his family, play games, and eat good food

And that is the whole interview! Nothing too important, but some of the tidbits about Oda are quite interesting and the indication of the time remaining left is quite important to understand how much of One Piece we have left