Before we begin today’s Chapter Secrets, I’d like to take a moment to remember OroJackson. If you don’t care skip ahead if you wish, but I’d like to dedicate some time to my memories on this site. As you’re likely aware, OroJackson, the most visited English-speaking One Piece forum in the world, is closing in just a matter of hours from now. After several struggles with several aspects of maintaining the forum running as well as other issues, the team has regrettably decided to close the forum for good.

When I first heard of this, it was a bit hard to swallow. For some reason a part of me took these communities for granted, but it’s true that some of these forums might come to an end so easily without any of us realizing it. And with how important of a tool, platform and opportunity that OroJackson has been to the community, its loss is a big damage not just for those that frequented the site, but for the One Piece fandom as a whole.

OroJackson’s end hurts me in two different ways: in one way, I feel it’s a massive loss for the community. Being a site for both resources and forum discussions, there isn’t quite another place that can quite as much replace the hole left by the absence of this site, especially one that matches its ease of use through its superb UI and one that has as high of a number of users involved on a daily basis. There exist other communities, even some attempting to act as OroJackson’s successor, but it will take a long time to match something on such a high level of quality as OroJackson.

But with that said, even if one day some community emerges to match OroJackson, the end of this community will still cause an irreparable loss for the legacy of the One Piece fandom. While many of its pages have been archived, other thousands of community threads will be lost to the sands of time, burning away many interactions, discussions, talks and moments between fans that have been a part of the history of One Piece’s fandom. As someone who takes preservation of content very seriously (which is one of the reasons why I made my site to begin with, to serve as a big archive for all canon information of One Piece), it really pains me to think that so much of the community’s history will be lost like ash to the wind. But it’s an unavoidable fate that we must bitterly accept.

On the other hand, this hurts me as a personal loss. I share a lot of fond memories for Orojackson, as I’ve been with it for about half of its total runtime. It was one of the very first platforms where I first began to interact with the community and share my content and it was the first where I was truly welcomed with open arms. Everyone was so kind and welcoming despite my youthful lack of experience and really allowed me to set in this community properly after many years of just being an outsider. I’ve had the chance to interact with some incredible people on this platform, make friends here and connect with the One Piece community as an essential part of my history with the fandom. Of course in the big scheme of things this is a much bigger loss for the community than it is for me, but it still is something that I feel affects all of us in a personal way in some form or another.

I’m not going to sugarcoat it and ignore the fact that OroJackson had a lot of toxicity. A lot of it. From power level discussions, to the endless Zoro vs Sanji, to the can x beat x, there was definitely a lot that this forum, like many others, struggled with. But even with all that, there was still a lot of friendly discussion, nice folks and so many conversations that helped share our knowledge and love for the series. For the One Piece community as a whole, OroJackson has played a pivotal role in sharing our experiences of this wonderful journey that is One Piece. Through all the toxicity and issues the platform had, there was still a community for the fans. And while One Piece is far from over, as are many of its other communities, OroJackson will leave a bittersweet hole in the fandom, as all of the times on it will soon become nothing more than fond memories.

I’ve gone to a bit more depth about this on OroJackson to offer my extended thanks to some users on the platform in particular, but I’d just like to offer my thanks in general to the platform and everyone who has helped make it what it became. Its contributions to the One Piece community will certainly never be forgotten anytime soon and it will go down as a massive part of the legacy of our community.

To honor OroJackson, one last time, let’s break down this chapter and all of its secrets! And what a chapter to go off with! 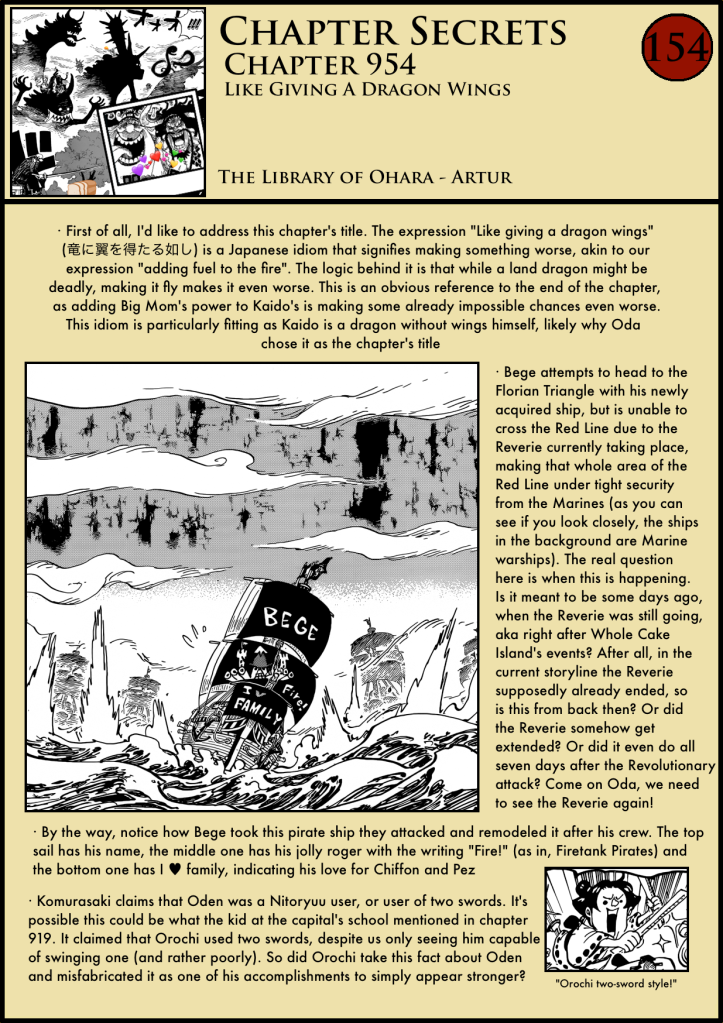 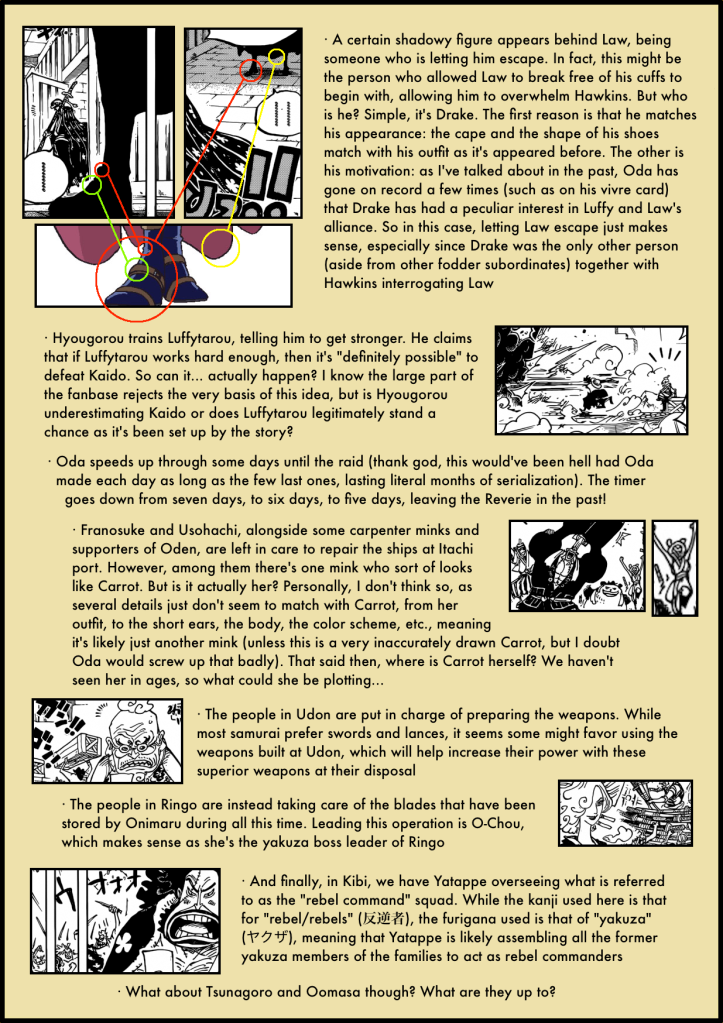 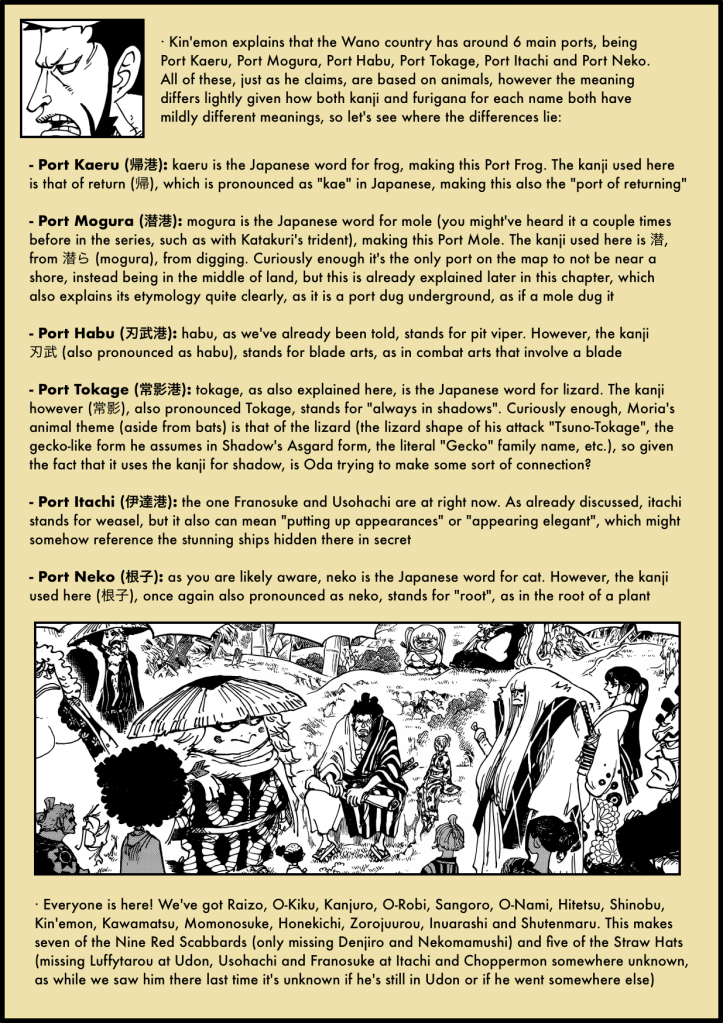 Just as a note, in case there was any confusion, I’ll still be creating my content like usual on the Library! OroJackson closing simply means I obviously won’t share my content anymore there, but nothing will change in regards of my output on the Library. One last time, I’d just like to say, thank you OroJackson!